SPORTS NEW FROM THE AD

The AHS Softball Team began it’s season by traveling to Columbus, Georgia on Friday, February 21, 2020 to participate in the Sidney Cooper Invitational. The girls are off to a great start.

Tennis is battling through their third week of area and non area matches. The boys and girls tennis teams are currently 1- 0 in area matches. Overall, boys have a 1-3 record and girls have a 2-2 record. Upcoming matches for the next two weeks are Mar. 10th Hartselle (H), Mar. 12th Columbia (H), Mar. 13th Lauderdale County (H), Mar. 16th Decatur (A), Mar. 17th Mae Jemison (A), Mar. 18th Muscle Shoals (H), and Mar. 20th Lee (H). All spectators are welcome to come cheer our players on at home and away matches!

From Coach Chuck Smith:  Athens High School baseball is entering week four of the 2020 season. After three weeks, the varsity team is 10-3. Each of our 3 losses are one or two run games. We have seen a lot of great things from our guys as well as some things we need to clean up in order to reach our goals. As a team, we are currently hitting .341 with 31 doubles in 13 games. Our pitching staff has been outstanding. We have a lot of guys we can trust to throw in big situations. In 86 innings pitched, we have 1.71 ERA with 135 strikeouts in 13 games. Our freshman and JV teams have been competing and showing improvements each time they take the field. It’s exciting to see how our players have grown from workouts, practice, and now games. Our guys are hungry to learn and to become better baseball players as we look forward to inch closer to our goals.

These young ladies and their coaches worked hard throughout the school year for this big event.  Congratulations to all on a job well done!

The AHS Boys Basketball season came to a close during the Class 6A Area 15 Area Tournament.  AHS lost a hard fought game to Muscle Shoals. The team played with high intensity and poise. They are ready to plan and prepare for next season.

The AHS Girls Basketball Team placed 2nd in the Class 6A Area 15 Area Tournament.  The final regular season AHSAA rankings placed AHS 2nd in Class 6A.  Girls Basketball ended their season on Friday, February 14 with a hard fought loss to Carver High School (Birmingham) at the Regional Tournament on the campus of Wallace State Community College.  The Golden Eagles ended their season with a 23-6 record.

They placed third in the Southern Shootout Boys Elite Division February 7-8,  in Foley.  Athens defeated Alma Bryant 3-1, lost to St. Luke's School 3-0, and defeated Guntersville 1-0 on an exciting Kicks From The Mark conclusion.   Athens scored on 4 out of 4 kicks, while Guntersille scored on 3 out of 5 kicks.   According to Coach Oakley, All 20 players participated in the tournament and conducted themselves in a way that brought dignity to the jersey they wore and the school they represented.

AHS Girls Soccer team also participated in the Southern Shootout.  They played 3 very strong teams and came up a little short. Coach Hurst is very proud of the tenacity each girl showed during the tournament and is looking forward to a good season. 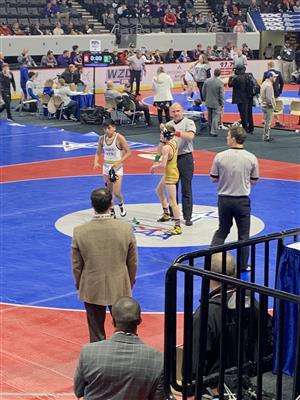 All 5 of these athletes participated at the state tournament Thursday, February 13 – Saturday, February 15 at the Von Braun Center in Huntsville . Coach Campbell stated he was very excited for the young team that he had this year and the promise of a very bright future for Athens wrestling.

The AHS wrestling team did a great job at the AHSAA State Tournament.  Here are the final results: