Garner Ezell has 39 years of experience serving as a teacher and administrator at the elementary, middle and high school levels. While a student at UNA, he was selected by the College of Education as one of Education’s Top Ten and was inducted into the Honor Society of Phi Kappa Phi. He is a member of the Council for Leaders in Alabama Schools (CLAS) and the Alabama Association of Supervision and Curriculum Development (Alabama ASCD).

Mr. Ezell resides in Athens with his wife, Deb, who is a retired ACS educator. He has two adult children, Rob and David, who are Athens High School graduates. 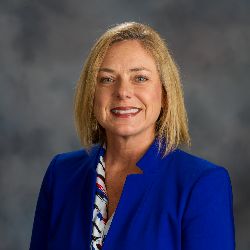 Beth Patton is an Athens native and has been part of the Athens City Schools team for twenty-six years. She obtained a BS in Elementary Education from Athens State University, a Master's from Alabama A&M University, and Class A Certification in Instructional Leadership from the University of North Alabama.

She is married and has twin boys who just completed four years of college. She is very active in her church and community. As the homeless liaison and director of student services and learning supports, Beth sees the challenges facing our students and families and considers herself blessed to have opportunities to positively impact lives.

Mrs. Serena Owsley has served as the Chief School Financial Officer for Athens City Schools since 2016. She earned her accounting degree from the University of Alabama in Huntsville and has worked for ACS for more than a decade. She oversees all aspects of the system's finances. Owsley brings years of experience in the private and public sectors with a focus on transparencey, accountability and fiscal budgeting. She helps streamline financial and procedural policies to benefit the financial health of ACS.

Dr. Carter is a graduate of Chipley High School in Chipley Florida. He earned his bachelor's, master's and education specialist degrees all from Jacksonville State Univeristy. He completed his doctorate at Lipscomb University in 2015.

Dr. Carter brings years of experience and leadership to his role as Executive Director for Innovative Programs. He was named Alabama’s Principal of the Year in 2013, Nominee for National Principal of the year in 2014, and the Council for Leaders in Alabama Schools (CLAS) Leadership Award Recipient for Alabama in 2013.  He led his previous school in a transformational one to one initiative with Apple earning the National Apple Distinguished System title in 2014-15. Currently, Dr. Carter serves as a mentor for new principals and assistant principals for the Alabama State Department of Education.  He received his mentor certification from The National Association of Elementary School Principals (NAESP).

He is married to Shannon Carter, counselor at AHS. They have four daughters; Helen, Katelyn, Sarah, and Megan.