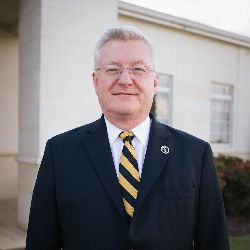 Mr. Johnson is an Elder at West Hobbs Street Church of Christ, and is the administrator of the Good News Child Development Center in Ghana, West Africa.  Mr. Johnson has a passion for aviation and received a private pilot license when he was seventeen years old. He has completed five marathons and many half-marathons, 10k & 5K races. He was also a football referee for 25 years and had the privilege of working two state championship games. Currently, his favorite activity is playing with his grandchildren.

Mr. Johnson believes Athens is a special place. He believes growing up in Athens prepared him well for an exciting career that has taken him all over the world. He also believes everyone should lead a life of service and help others in the community. Mr. Johnson has served on the Athens City Board of Education since 2006 with ten years of service as board president.

He holds a B.S. in Computer Engineering from Auburn University and has earned level four board member status with the Alabama Association of School Boards.

Mrs. Malone is a 1981 graduate of Athens High School. She is a lifelong resident of the Athens community, and she loves Athens. She is married to George "Ricky" Malone, and they have two children; Dr. Christian Malone and Tyree Malone, a student at Alabama A&M University. Mrs. Malone has served on the Board of Education since 2007. She is a member of Little Ezekiel Missionary Baptist Church in Tanner, Alabama. She is a self-taught baker, and she loves construction.

Mrs. Malone loves helping students achieve above and beyond what they can imagine. She believes motivating them to be the best they can be is essential to success. She believes serving on the board is privilege and honor and hopes her service inspires teachers, parents and the community to love and support the students of ACS to the best of their ability.

Tim Green is a Senior Vice President and Commercial Banker for Renasant Bank in Huntsville Alabama.  Renasant Bank is a 115 year old financial services corporation based out of Tupelo Mississippi.  Renasant operates offices in Mississippi, Tennessee, Alabama, Georgia and Florida. He has 30 years of experience in the banking industry and has been a Commercial Banker in North Alabama for two decades. Tim lives in Athens with his wife of more than 28 years and their two children. Tim currently gives back to the community by serving on the Athens City Board of Education, The Hogan Family YMCA Advisory Board, and as Scoutmaster for Boy Scout Troop 240 in Athens.  He has served on several other boards in the community over the past 14 years, including the Limestone County Economic Development Association, Greater Limestone County Chamber of Commerce, and the United Way of Limestone County. Tim graduated from the University of North Alabama in 1990 and is a Certified Bank Auditor and Certified Treasury Professional.
Mr. Green states that, "Being able to serve the community is a privilege and helping kids reach their God given potential during the process is just the icing on the cake. I love working with kids and if I can be a small part of helping any child reach their potential then that is a blessing. The best part of being on the board is visiting the schools and seeing the kids in the classroom learning and preparing for their future. Thank you for giving me the opportunity to serve.
Mr. Green has served on the board for over 8 years.

Mr. Scott Henry moved to Athens with his parents, Mike and Paula,and younger brothers, Brian and Wes, as a third-grader in Athens City Schools. Scott graduated from Athens High School in 1987 and went on to Auburn University where he earned a degree in Accounting.  After working several years in public accounting and earning the designation of Certified Public Accountant, he entered government accounting. He currently is a controller for a defense contractor.

Mr. Henry is married to the former Dana Sims, AHS Class of 1986, and they have one son, Mitchell who is an AHS graduate and a student at Auburn University. The family attends First United Methodist Church and is active in numerous community endeavors. Mr. Henry is deeply committed to public education and, specifically, the future of Athens City Schools. He feels this is an exciting time of challenge and innovation for the system and is proud to be part of the administrative arm of the organization. 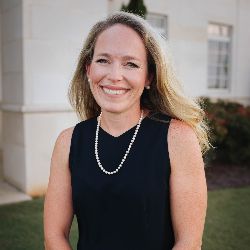 Shannon Hutton is an Athens native and a product of the Athens City School System. She graduated from Athens High School in 1994 and continued her education at The University of Tennessee in Knoxville. She graduated in 1998 with a Bachelor's Degree in Nursing. She is married to Ben Hutton, a Huntsville attorney, and they have four children who are students in the Athens City School System.

Mrs. Hutton has held multiple leadership roles in respective PTO's relating to her children. In addition, she has served many community and church organizations as a leader and also as an officer. Mrs. Hutton has great devotion to Athens, Alabama and strives to do what is best for the children in this exceptional school system.

As the longest standing board member in the State of Alabama, Mr. Lucas has faithfully served Athens City Schools since 1995. He was educated in the Limestone County School System where he attended Pine Ridge School in the Tanner area. He is a graduate of the Trinity High School located in Athens. Upon graduation from Trinity, Mr. Lucas was drafted into The United States Armed Forces where he served two years in Germany as a crew leader in an artillery unit. After being honorably discharged, Mr. Lucas enrolled in Alverson Draughon Business College and graduated with an Associates Degree in Business Administration. He worked for Radio Corporation of America on Redstone Arsenal and was later employed by Amoco Chemical for 31 years. While serving on the school board, Mr. Lucas has obtained the status of Master School Board Member Honor Roll and was also selected for the honor of All-State School Board Membership in 2015. He has served as vice president and president of the Athens City Schools Board of Education. 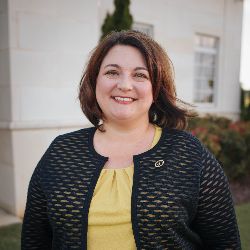 Mrs. Jennifer Manville moved to Athens in January of 2003 with her husband, Joe.  They have one daughter, Jillian who is a student in Athens City Schools.  The family attends First United Methodist Church of Athens.

Mrs. Manville received a bachelor’s degree from Auburn University and a Master in Business administration from Troy University. She works as a financial analyst for a defense contractor in Huntsville and brings her 20 plus years of business and finance experience to her board service.

She is honored to serve the city of Athens as a school board member. She believes strong public schools will always be the foundation of a community. Maintaining a sense of the great tradition of Athens City Schools while pursuing new innovative educational programs for student engagement and success is her key focus.